I’m not typically a grower of green things, but I’m trying.

I have two large pots of Gelsemium Sempervirens, AKA Carolina Jessamine, or just Jasmine. They produce little yellow flowers that give off a wonderful scent and an aroma that fills the air, and they are beautiful to look at.

All true, but I didn’t plant the Jasmine for those reasons. I planted them to help create a tranquil and beautiful, sanctuary of peace.

My home has an atrium in the center of the house. There are 14 floor to ceiling windows. From almost any place you can see into the atrium.

When we bought the house, the atrium was wildly overgrown, had a smelly pond, and a broken water feature. It was trashy, muddy, and unusable. But I had a vision.

I took out everything, lowered the floor by 8″ and put down 2800 pounds of sand and 150 pavers at 22 pounds a piece. I filled the open areas with 2500 pounds of rainbow gravel. Then added the table and chairs, a fire pit, a water feature, and hung candle lanterns. It took me six months. It’s beautiful. 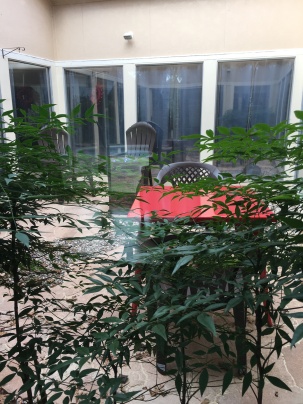 My atrium is my sanctuary. Most of my blogs are written there. Much of the book I’m writing is written there. But mostly, I just enjoy the quiet, peaceful environment; the sound of the water, the flames at night, and the lovely sense of tranquility.

The green things give it life, and nourish my soul.

Last week I heard someone ask their friend this question, “How you doing.” The response was, “Not bad for a Tuesday.”

What does that mean? How is a person supposed to feel on Tuesday? “Not bad for a Tuesday,” suggests that Tuesday’s have something about them that affect our emotional well being.

The days of the week with feeling:

Mondays feel tired and dreary: its back to work, school, and routines.

Wednesdays feel long but hopeful: only two days left, I can do this!

Tuesdays are empty. Perhaps the person responding with, “Not bad for a Tuesday,” was referring to how Tuesday’s are so bereft of purpose. Maybe he was feeling good about having found something to do?

AN IDEA WHOSE TIME HAS COME

Perhaps the time has come for this idea. Since Tuesday’s are dull and pointless, I’m suggesting they be dropped from the work week. It might look like this:

Tuesdays would become another day off with pay. Employers might disagree, mildly, and some might even complain. But really, nothing gets done on Tuesdays. When you think about it, it’s absurd that business and commerce have been trying to prosper on Tuesdays, it’s ridiculous.

So let’s get busy writing congressmen, senators, politicians, union leaders, supervisors, employers, and whomever it is we write when we write to someone in authority. Let’s get Tuesday’s realigned to where they should have always been: a much deserved day off!

To help jumpstart this fabulous idea, I’m taking this Tuesday off. I can’t imagine anyone caring, or even noticing. I do have some scheduled appointments, a staff meeting, a church leader’s meeting, and probably some other stuff.

This could prove difficult.

I’ve written this blog at 4:30 on Saturday morning. There’s a small chance it may lack clarity and a high probability that it lacks any redeeming value.

See you on Tuesday.

Ten lepers are a group of very sick people. From Luke 17, Jesus was entering a village when the ten called to him. They did so from a distance, for they were unclean, and leprosy could do that to a person. Required to keep their distance, they knew better than to approach him, for the clean could not risk becoming defiled. What did they say? “Jesus, Master, have pity on us.”

It’s likely they were separated from family, removed from their villages, and unwelcome at the door of anyone’s home. They couldn’t enter the Synagogue for prayer and Torah reading. They were outcasts and would likely die a lonely, painful death. They were a band of broken brothers, linked by leprosy. “Jesus, have pity on us!” He did. He healed them and his healing was a total fix. He wasn’t just curing illness, but provided a complete restoration of the body. Appendages were brought to life. Noses of rotting flesh were replaced with healthy tissue, their ears and limbs were repaired.  They were as good, or even better, than before they got sick.

I would have quickly found a priest to pronounce me clean, then complete Torah’s requirements, and head for home like a scalded dog. I would rush through the door of my house to hold the children I hadn’t hugged and embrace the wife I hadn’t kissed. All my family and friends would celebrate my good fortune. It would be glorious!

Odd that one of the ten was Samaritan. Only in the company of lepers would a Samaritan be accepted by Jews. Even more odd, is that he went back to tell Jesus thank you, and did so while kneeling at his feet. Before returning home, before his wife and family, he said thank you. “Where are the others,” Jesus asked?

Perhaps they were too busy celebrating to consider such courtesies?

Jesus made me clean. He washed my sins and then he scrubbed the stains. He repaired my soul, restored my life, and brought me back to the Father. I am whole and wholly renewed. But am I thankful? “Jesus, have pity on us.”

It’s fifteen days till Thanksgiving. But please don’t wait to tell Jesus thanks. Any day is a good day to remember our blessings and be grateful, don’t you think?