People make attachments, it’s in our nature. Some things that I’m attached to:

These things don’t define me, they don’t determine who I am or establish my value. But I love them. I’m attached.
The question is: Are there attachments in my spiritual life? Are there ideas and beliefs with which I have made secure connections? The answer: Of Course!

There are many, many more.

Jesus once spoke to a woman with attachments. He asked her to give him some water from a well. She reacted with surprise, if not shock because men didn’t speak to women in public unless they knew them. She had no idea who he was.

Their conversation moved into the spiritual. When the woman grew uncomfortable, she claimed that the well belonged to the Patriarch Jacob, who was Abraham’s grandson. And in her day, the land they were standing on was Samaritan, not Jewish. To her, the well was a physical manifestation of a sacred heritage.

Consequently, she didn’t need to listen to Jesus. Her faith and religion were well established by Jacob’s well. She was attached to the well, not for its water, but for its spiritual value.

However, he was the Messiah, and when she realized that he was, she went back to her village and told everyone that she had found the Lord’s anointed. She led them to Jesus, and they asked him to stay, and he did, for two days, and many of them believed.

Does it seem silly that she was so spiritually attached to a well? Or is it only a matter of time, place, and culture? Are we connected to anything that defines our faith and spirituality?

The woman didn’t wake up that day, knowing she would encounter the Messiah. She went to the well to get some water, but what she really needed couldn’t be carried in a bucket. He gave her living water, springing up from within, a wellspring of the Holy Spirit that would never run dry.

Cemeteries have existed for as long as man has been on the earth. Every culture has its customs and burial traditions. Some are rooted in religious beliefs while others are based on mysticism, folklore, and superstition. 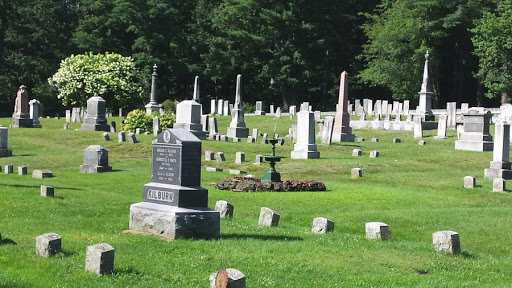 Regardless of the cultures and customs, we have always required a place for the dead to rest. Cremation is a type of burial, whether the ashes are kept intact or scattered to the winds, its an ancient and modern approach to how we manage our dead.

Abraham lost his wife. Her name was Sarah and when she died he realized that he had no place to bury her. He had moved his family to Canaan and had yet to face the prospect of death in his family.

So, Abraham met with the Hittites who were the owners of where he had pitched his tents. He asked to purchase a piece of land that had a cave, the cave of Machpelah. He paid them 400 shekels of silver and then laid his Sarah to rest in what became the family tomb.

Eventually, Abraham was buried there as were Isaac and his wife Rebeckah, and Jacob and his wife Leah. Rachel was not buried in the tomb. She had died in childbirth while in the vicinity of Bethlehem and buried there.

The Tomb of the Patriarchs became sacred to the Jewish people, it was the final resting place for their greatest forefathers, especially Abraham.

The Jewish Mystics believed that the cave was also a portal to the garden of Eden–where Adam and Eve were buried. So, the cave of Machpelah symbolized the creation of man and then the line of the heritage through the patriarchs.

Jacob’s wife Leah was buried in the cave, she had given birth to a boy named Judah.

From Adam to Abraham. From Abraham to Isaac, Jacob, Judah, David and the Christ, the Son of David, the Son of God. From Jesus to you and to me and to all who believe.

Cemeteries and burial places can be fascinating places. For those who believe, a cave in ancient Canaan became a tomb representing the beginning of time and the fulfillment of the ages, the Messiah’s arrival.

He came to offer salvation to the world.

It was just a cave, a burial tomb, but for every believer, it represents our spiritual roots and the beginning of our blessings in Jesus Christ.