We have lots of ways to demonstrate our excitement. One of the most prominent is, “The High Five,” the act of raising up a hand, thus the five fingers, and slapping someone else’s raised hand.

Although it seems to have been around forever, dictionaries have only included the term as a noun since 1980 and as a verb, or the action of the high five, since 1981.

It first happened at Dodger Stadium on October 2, 1977, in the last game of the season. Dusty Baker hit a homer that made the Dodgers the first team ever to have four players hit thirty home-runs. As Baker was rounding the bases, Glenn Burke, the next hitter, went to the plate to congratulate him.  He did so by raising his hand up high, and Baker returned the gesture.

“His hand was up in the air, and he was arching way back. So I reached up and hit his hand. It seemed liked the thing to do.”

And the High Five Was Born

It happened last Sunday morning during first service. It was time for the offering, and the children were cued to come and give their gifts that support Haitian kids for Christian education. They drop change and dollar bills into a basket. It’s a big deal in our church and the kids love it.

Afterwards, they walk back to their parents. On that Sunday, as they were walking back, a little girl sweetly smiled and put her hand up. So, I smiled back, put my hand up and she smacked it. I loved it. A few feet behind her was a mom with her very young son, I think he is almost two. He was adorable. She’s teaching him to be generous with those in need. He doesn’t understand yet, but he will, and it will become part of his character.

He had watched the girl give me the high five, so he headed my direction. He could barely walk and was holding one of his mom’s fingers. He looked at me excidedly and raised his little hand. We shared a high five. He was so happy. The whole thing made me emotional.

I like kids. I’ve learned that kids like to have adults pay attention to them. An adult who notices them and cares about the things they care about is very like Jesus, who always welcomed the children, for theirs is the Kingdom of God. 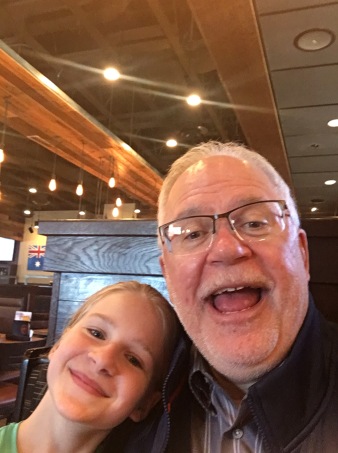 “And he took the children in his arms, placed his hands on them and blessed them.”