I don’t know why but boys between the ages of six and eleven love a good pile of junk. It’s the stuff people set out to be collected or the free treasures found in a town’s garbage heap. I would joyfully take junk home to our garage. Dad understood but not for long.

“Ricky, what are you going to do with all that junk,” Dad would ask? “I don’t know, maybe tear it apart and build something?” ” Throw it away by Friday,”  he would say.

Throw it away? I just got it from someone who threw it away.

All kinds of things can be found on the edge of towns, outside city limits. There are small town trash heaps, unwanted stuff at the dump, and all manner of dilapidated sheds and crumbling barns filled with rusted but interesting stuff.

You know what else you could find outside of town? Well, if you were in Jerusalem around 33 AD you could find Jesus on a cross. It was Passover and the important people who deeply resented and passionately hated Jesus were busy getting the Romans to kill him. They succeeded.

“And so Jesus also suffered outside the city to make his people holy through his own blood. Let us then go to him outside the city, bearing the disgrace he bore.” Hebrews 13:12-13

He was crucified outside the city so as not to contaminate the Jews with dead bodies and Roman rituals. They wanted to remain undefiled in order to participate in their most holy feast: Passover.

Here is a favorite of mine by George Macleod:

“I simply argue that the cross be raised at the center of the marketplace as well as on the steeple of the church. I am recovering the claim that Jesus was not crucified in a Cathedral between two candles but on a cross between two thieves; on a town’s garbage heap.

If you read your Old Testament you’ll discover that the Kidron Valley, between the Temple Mount and the Mount of Olives, was Jerusalem’s garbage dump for idols and all things related to idol worship. It’s where idols were crushed, broken, and burned. It’s where unwanted things were thrown away.

In 2013 and 2014 archaeologists from the Israeli Department of Antiquities did some excavation in the Kidron Valley and discovered a massive rubbish site dating back to the Roman occupation of Israel. The Kidron Valley was Jerusalem’s garbage dump. 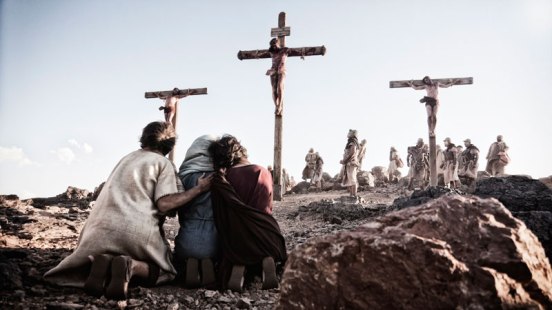 Jesus died outside the city and it was possibly in or near the Kidron Valley. It would make sense because his enemies thought him a false teacher, false messiah and a blasphemer.

To them, Jesus was a piece of unwanted trash to be thrown out with the garbage.