Imagine this: Your fiancé is pregnant and for sure you know the baby isn’t yours. How do you feel about it? What are you going to do? You were promised to each other since childhood and purposed to spend your lives together. Now, your hopes for that life are over.

Devastated, you ask yourself,

In tears, she promises that she hasn’t been with anyone. In disbelief you ask,

“Then how can you be pregnant?”

“The baby is from God, of the Holy Spirit, the angel told me.”

In anguish you respond,

“Joseph, instead of being angry and hateful, how about being kind and righteous? Don’t disgrace Mary with a public termination of the betrothal?”

Could you have made that choice? Could I? Believe it or not, that’s exactly what Joseph did. Then an angel said to him in a dream,

“Joseph son of David, do not be afraid to take Mary home as your wife, because what is conceived in her is from the Holy Spirit”

“She will give birth to a son, and you are to give him the name Jesus, because he will save his people from their sins.”

Can you imagine Joseph going to Mary, of how that conversation would go:

“Hey Mary, you’re never going to believe what happened to me last night?”

Actually, it wasn’t hard at all

We celebrate the story of the infant king’s virgin birth. But 2,000 years ago, in a  little Galilean village, there was a moment when the story might never have happened. Joseph was facing what he thought of as an unfair future. But it wasn’t.

A lesser man would have walked away. But Joseph wasn’t a lesser man.

Like his Dad, Jesus chose righteousness over vengeance. He forgave and through his forgiveness brought salvation to our world. For the name “Jesus” means, 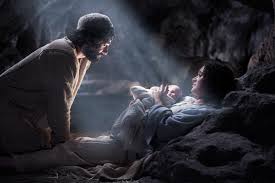 In this season of Christ’s birth, I am grateful for Joseph.